Shop By Color
Shop By Cause
Popular Brands
Just In! 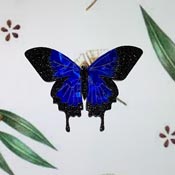 Coal Based Jet Vs. Jet Glass Or Crystal

Posted by Dana Bates on 6/16/2016 to Jewelry Help
I am still working on my Victorian blacks article but thought I would talk a bit about the difference between the various "jet" jewelry materials and jewelry terms. There is Jet, Whitby Jet, French Jet, Jet Glass, Jet Crystal etc. All lovely black colored materials used to create jewelry to this day.
Technically French Jet is a term originally used for Victorian jewelry pieces that were made from black glass to mimic real Whitby jet for the people who could not afford real Whitby jet. Whitby Jet is a fossilized tree AKA coal based material. Coal based jet is sometimes available from other countries but the quality is not the same as Whitby's which is why they mined the cliffs to the point of dangerous instability during the peak of the Whitby Jet mourning jewelry craze. The Romans were using it well before the Victorians and that is where the term jet-black may have come from. There were Roman graves that had both jet and black glass in them so the Romans used both way back then too!
The term "jet" is still being used to describe regular black glass and crystal since it is a "color". Swarovski sells jet crystals. So when folks call glass jewelry that is not Victorian jet glass, jet colored glass, jet crystal, jet black glass etc. I am OK with it. More so than them calling it French jet because as a Victorian collector that implies that the piece is older and would mess with my internet searches.
Whitby jet is actually a very deep black color. It is only when you perform a streak test that the streak looks brown on the ceramic tile. A coal based jet is matte when mined and can be polished to a high shine. Jet is a very soft material and over time the shine can be worn away a bit with light scratching. There is a photo of Roman jet that is very brown in color so it is possible that jet from other countries could be less black. I do not own a contemporary Whitby jet piece to see if there would be a difference in the color of the streaks between it, a well stored antique piece or jet that is found in other countries.
There are a few contemporary artists that work with fresh Whitby jet. I like to look at their work because it shows you what our Victorian Whitby jet would have looked like during the time period when it was made. Search google and you will find some smashing examples of contemporary Whitby Jet jewelry. I have linked a few below.
http://jacquelinecullen.com/
http://www.eborjetworks.co.uk/
Enjoy the night!
Dana Rae
Previous Post
Next Post
comments powered by Disqus